By: Noah Asimow, The Vineyard Gazette

By: Noah Asimow, The Vineyard Gazette

One person came all the way from Sweden, journeying thousands of miles across the Atlantic for the chance to help with Covid-19 vaccinations on a different side of the ocean. Another arrived from an ICU team in Tampa, Fla., while others traveled shorter distances, taking the ferry from their homes and hospitals in Falmouth and New Bedford, or driving from Oak Bluffs.

They came to help, to heal, to serve and to smile. And they came together in the lobby of Martha’s Vineyard Hospital Tuesday, doing their part in the effort to inoculate Island residents against a virus that continues to keep them (six feet) apart.

“We call ourselves the Covid Busters,” said Ashley Fauteux, who previously worked in primary care at the hospital as a supervisor but now works for the hospital’s vaccination clinic. “That’s our little nickname for ourselves. It includes all the nurses, all the schedulers, everyone behind the scenes who helped build the department. Anyone that’s involved in the vaccine clinic, is a Covid Buster.” 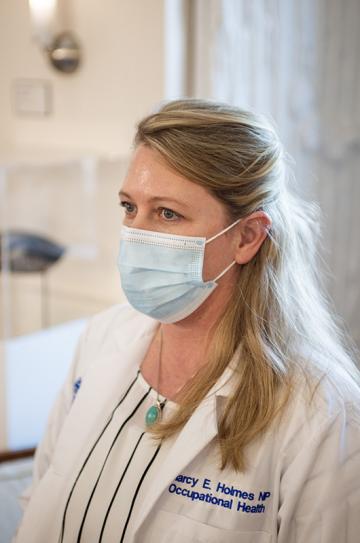 Once a small team of nurses and per-diem staffers running clinics for their healthcare co-workers and first responders, the team has grown to keep up with the state and federal vaccine supply as eligibility has expanded. Now there are more than 30 nurses, greeters, observers and schedulers who have vaccinated 36 per cent of Dukes County with their first dose shots, and 15 per cent with their second doses, according to state numbers. Eventually, almost the entire Island will take part in the process. But it still has a long way to go.

“I’m completely honored to be at ground zero, bringing in a brand new vaccine and introducing it to the Island,” Ms. Fauteux said.

As the Covid-19 pandemic continues to rage, the hospital, which is the only state vaccination site on Martha’s Vineyard, has spent the past four months building out a state-of-the-art operation almost entirely from scratch, repurposing its once-quiet lobby and foyer, vacant downstairs offices and outdoor patio into an efficient, buzzing clinic. It’s a major change of pace — and patients — for a building that was essentially closed to the public for five months back in the spring and summer of 2020.

“I love seeing the people I grew up with,” Ms. Fauteux said. “The old fishermen from Menemsha, I’m like, who got you out of your house? But they’re grateful, and so are we.”

The process, refined over months, is straightforward. Patients get in line, get their shot, and then wait 15 minutes in the lobby to make sure they don’t experience serious side-effects (no one has so far). Nurses direct traffic flow, provide snacks or beverages, and clean the folding chairs spaced six feet apart. They also DJ.

The whole thing generally takes less than half an hour. The head of the operation is Marcy Holmes, a gregarious primary care nurse practitioner. When the pandemic hit, she was asked to work in occupational health, which was initially responsible for frontline vaccines. She had all her coworkers vaccinated in about three weeks. But her work had only just begun.

“Occupational health were the ones who gave the first vaccines to hospital staff,” Ms. Holmes said. “And then they were like, oh, well, let’s keep going. Let’s do first responders. And here we are.”

Ms. Holmes, part general manager, part maitre’d of the hospital lobby, described her job — which includes staffing and logistics — like running a restaurant that has a set number of tables but an unknown quantity of reservations and meals, with vaccine supply dictated by the state and federal government. Ms. Holmes said the hospital has the capacity to vaccinate 1,000 people per day. But with the current supply issues, the most they’ve done is 600. 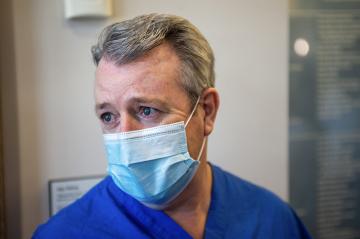 Noel Mooney moved from Sweden to help out. — Ray Ewing

“It’s a challenge,” Ms. Holmes said. “I’ve joked with friends, it’s like planning for a wedding, where you don’t know if there are 150 guests or 50 guests, and there’s no line-up for the buffet table.”

Good hiring helps. The hospital has added a number of nurses since the vaccine clinics began. Brianna Davies, a young nurse who was giving shots on Tuesday, grew up on the Vineyard and returned from Florida in January after working in a pediatrics unit in Tampa. That hospital had eight floors dedicated just to Covid-19 patients.

“In the beginning, it was definitely crazy,” Ms. Davies said of working in the Tampa hospital. “I saw a lot of pediatrics patients with Covid, which was really hard…It was this dark, Covid time. And people were really sick there.”

Ms. Davies came back because she wanted to spend more time with family — and to help fight the virus on her own turf. She was hired on March 11. While she does the same thing all day — give shots — she said the monotony pales in comparison to the sense of gratitude she receives from patients.

“It’s uplifting, to be helping people in this community where I grew up. I feel like I can look back, in 70 years or whatever, and say I was giving hundreds of vaccines. There’s kind of a light at the end of the tunnel.”

Gillian Pierce, an ICU nurse from Falmouth who works full-time at St. Luke’s hospital in New Bedford, picked up extra, per diem shifts to help with the vaccine clinic at Martha’s Vineyard Hospital. She started in February.

“I saw an opportunity to help give the vaccine to stop a deadly virus I’ve been dealing with in the ICU for the past year,” Ms. Pierce said. “It’s been pretty bad over there [at St. Luke’s]. A 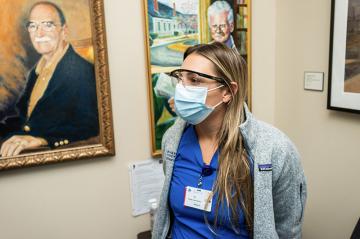 She said the ferry ride, and working on the other side — of both the virus and the mainland — helps relax her.

“I love this,” she said. “All the patients are happy to get the vaccine.”

Noel Mooney grew up in Ireland and had been employed in urgent care at a hospital in Stockholm when he saw a posting for the vaccine clinic on Martha’s Vineyard. Back in the winter of 2020, before the virus had surged in the U.S., Swedes returning from ski trips in northern Italy brought the virus with them, Mr. Mooney said. He got infected then, but remained healthy, and had been working at a Swedish hospital ever since. He joked that the ubiquity of skis help keep people six feet apart, making a lockdown unnecessary. But the vaccine rollout has been much slower in Europe, with doses bottlenecked. He decided to come to the Vineyard to take part in the historic process.

“I live on an island in Stockholm, so it was really easy for me to come,” Mr. Mooney said with a laugh. “But people are really happy to be here. They’re fearful of this virus. They’ve seen what it can do. So it’s great being part of this.”

Celia Gillis, a year-round Island resident who had volunteered at the regional high school test site, came out of retirement to help with the vaccine clinic, working as a nurse again for the first time in 18 years.

“This is like the happy place on the Island now,” Ms. Gillis said.

“ I mean, there’s people that come in, in tears, sure. They’re just so relieved. It’s very emotional for some people. And, then, of course, you get emotional. And then it makes you think, how lucky we are to be able to provide this. For everyone.”